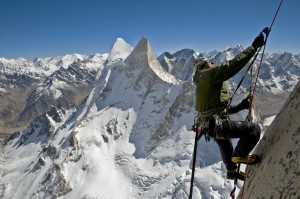 In October 2008, Conrad Anker, Jimmy Chin and Renan Ozturk arrived in India to tackle Meru. What was meant to be a seven-day trip with the equivalent amount of food became a 20-day odyssey in sub-zero temperatures, thanks to the setback of a massive storm that showered the mountain with at least 10 feet of snow. Like everyone before them, their journey was not a successful one. But they had reached further than anyone else, beaten back just 100 meters below the elusive summit.

Heartbroken and defeated, Anker, Chin and Ozturk returned to their everyday lives, swearing never to attempt the journey again. But they faced sudden physical and emotional challenges back home, too, challenges only exacerbated by the siren song of Meru, one that Anker perhaps heard the loudest. By September 2011, Anker had convinced his two lifelong friends to undertake the Shark’s Fin once more, under even more extraordinary circumstances than the first time around.

MERU is the story of that journey—one of friendship, sacrifice, hope and obsession.

This site uses Akismet to reduce spam. Learn how your comment data is processed.